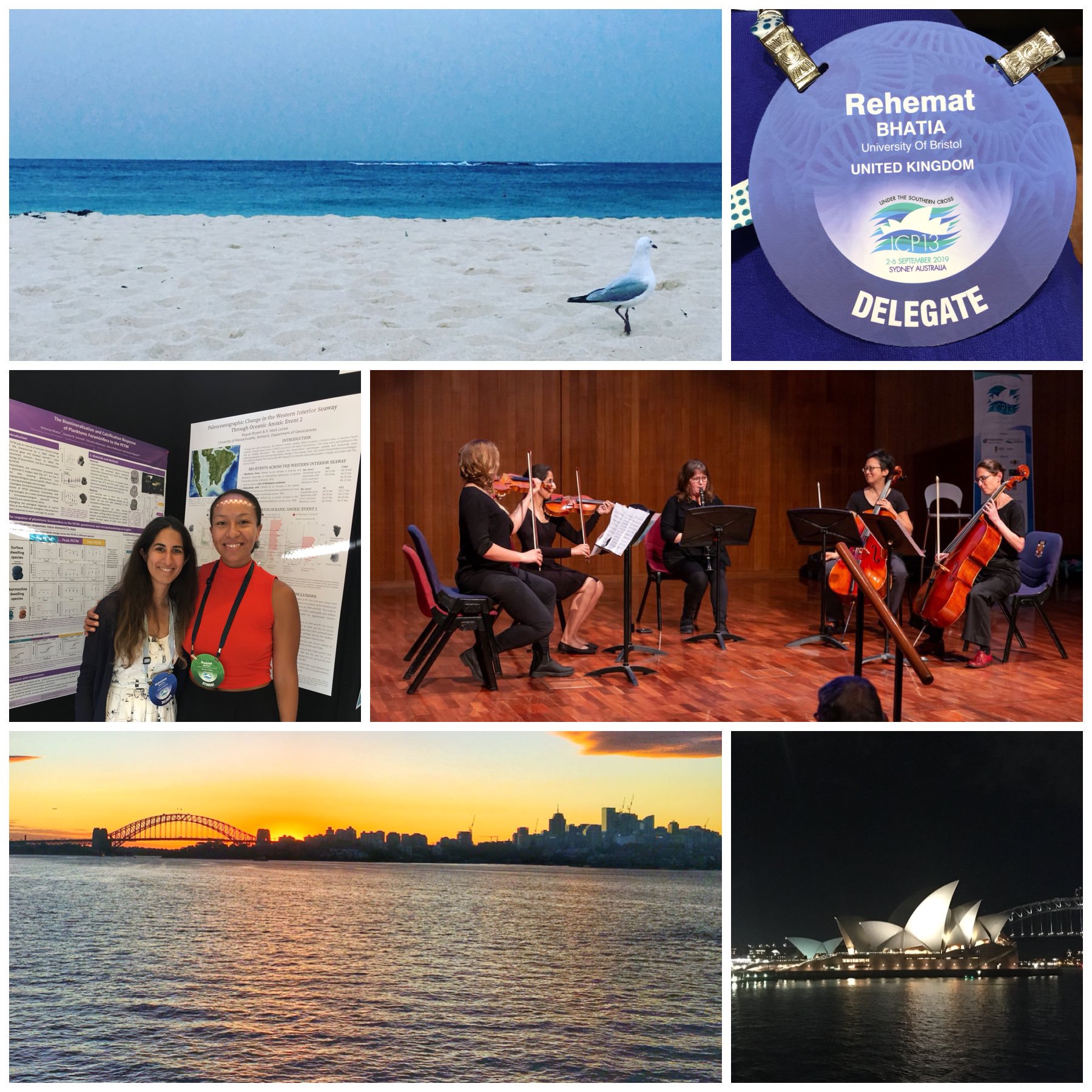 During the first week of September 2019, a sea of several hundred paleoceanographers descended on the city of Sydney, Australia for the 13th International Conference on Paleoceanography (ICP). Thanks to a Stepping Stones Bursary, I was able to attend the 13th ICP in Australia after my postdoc, based at the University of Bristol, recently ended. My postdoc focused on studying the biomineralisation and calcification response of planktonic foraminifera to the Paleocene-Eocene Thermal Maximum, using trace element/Ca ratios (obtained via laser ablation inductively coupled plasma mass spectrometry), and µ-CT scanning derived calcite:volume ratios, and it was these data that I presented at ICP. ICP was a much anticipated conference for me, as I really enjoyed my postdoc, thus I was super excited to share my new foram stories with the paleoceanography community, and discuss the interpretations of my data with them. Additionally, attending an ocean themed conference, right by the ocean, was a total bonus.

ICP is held once every three years, and was first started by Nicholas Shackleton in the early 1980s. The conference consists of invited talks by researchers who specialise on different aspects of paleoceanography on a range of timescales, from the Holocene to the Cretaceous. All other delegates present posters. As well as a conference dinner and pre and post conference workshops, there is also a paleomusicology concert partway through the week, which Nicholas Shackleton included due to his love of music. As well as being a paleoceanographer, he was also a clarinetist and owned 300 clarinets. This year, I took part in the paleomusicology concert, playing a chamber piece with 4 delegates from various career stages from Australia and the USA. We named ourselves the “Teleconnections” , inspired by the composer whose piece we were playing - Telemann.

Attending ICP allowed me to actively highlight, present and gain feedback on my postdoctoral research with other specialists in my field. I thoroughly enjoyed my poster session, and the feedback I received was really useful and will definitely help me when I start to write it up into a paper.  I also enjoyed hearing about the latest developments in paleoceanography in all the talks, and learning more about proxy calibration, marine calcifier geochemistry and (palaeo)biology and ocean biogeochemistry.

The conference also allowed me to expand my academic network (including meeting researchers who I had only previously known via Twitter!), and obtain career advice. The end of a postdoc contract is one of the most unpredictable, stressful phases in an early career researchers career journey, as you really don’t know when your next opportunity will start, or where it might be (if you’re considering positions further away from home). Whilst sometimes it provides time to think about where your CV needs improving, or what you need to do in order to pursue a certain path, going to a conference and talking with as many people as possible to get a broad set of views is definitely the best approach to figuring out your next step, even if you don’t end up applying for a role with them. I am glad I was able to gather helpful advice and feedback during my time at ICP, and incredibly grateful for the funding I received from The Challenger Society for supporting my attendance.

The data generated during my postdoc will benefit the marine science community, as it will aid in constraining the controls on palaeoclimate proxies, and ground-truthing them in deep-time. Proxies derived from planktonic foraminifera are additionally controlled by their calcification and biomineralisation mechanisms, and palaeoecology. As these marine calcifiers are a commonly used proxy archive, it is imperative to understand how these aspects potentially change during past warm intervals - especially those which are future climate analogies such as the PETM.

Rehemat is a foraminifera geochemist, and recently finished a postdoc at the University of Bristol. She uses trace elements and stable carbon and oxygen isotopes to understand more about the ecology of deep time planktonic foraminiferal species, their biomineralisation strategies, and responses to dramatic climate change events, using a combination of geochemical and micropalaeontological approaches.