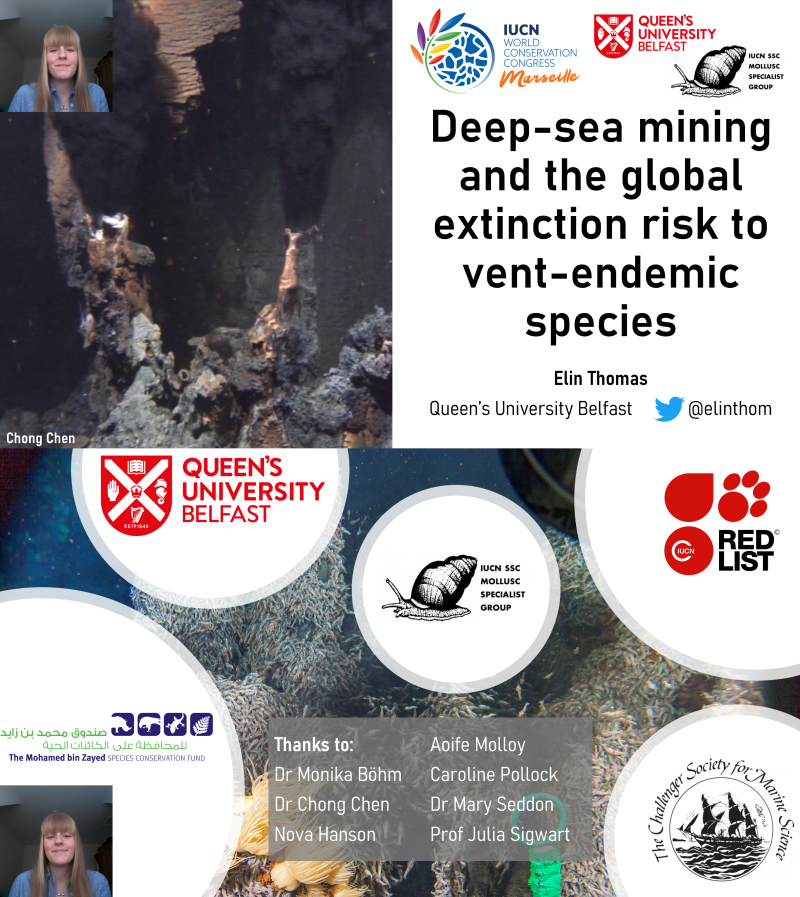 I am incredibly grateful to the Challenger Society for supporting my attendance at the IUCN World Conservation Congress, where I presented my research on the global extinction risk of hydrothermal vent species under threat from deep-sea mining. When I first applied for the travel award, the IUCN Congress was due to take place in June 2020 in Marseille, France, and I was looking forward to my first international conference of that scale (there were 10,000 attendees from 192 countries at the 2016 Congress!). As it was, the Congress eventually took place as a hybrid meeting in September 2021 (I need not say why), and I chose to present online owing to the difficulties in travel at the time. Although it was disappointing not to be there in person in Marseille, I am grateful to have still had the opportunity to attend the Congress thanks to the hybrid format. It was an invaluable experience to present on such a global stage and so interesting to hear about all the cool conservation initiatives happening around the world.

The Congress itself was split into three components:

The Forum, which hosted global discussions about the most urgent conservation challenges facing us,
The Members’ Assembly, the IUCN’s highest decision-making body where stakeholders make joint conservation decisions, and
The Exhibition, where participants can showcase their work to the Congress audience and general public.
I presented my research as part of the special session ‘The Deep Sea: Out of Sight and Under Pressure’, which took place during the Congress Forum. The session aimed to bring together conservation biologists and deep-sea scientists to discuss the challenges faced by deep-sea ecosystems, with a particular focus on deep-sea mining. There were also talks from Professor Amanda Bates, Dr Alan Leonardi, and Professor Julia Sigwart during the session. The deep sea rarely gets such attention at these kinds of events so I was honoured to play even a small part in making the deep sea more visible to global stakeholders.

It is often difficult to gauge audience response during online conference sessions, but I do believe our deep-sea session had a positive impact. At the end of the Congress, delegates vote on a series of motions to inform the official ‘Resolutions and Recommendations’ within the IUCN’s general policy and there was one motion that was of particular interest to us. Motion 069, which proposed the protection of deep-ocean ecosystems and biodiversity through a moratorium on seabed mining, was overwhelmingly voted in favour by the IUCN constituents. It is very encouraging to see such a global call for a moratorium on deep-sea mining, and I hope that my research can help support its implementation.

One final and rather unexpected highlight to mention was watching Harrison Ford’s address during the opening ceremony of the Congress, so I will leave you with a quote:

Awardee Profile:
I am a final year PhD student at Queen’s University Belfast studying the conservation of deep-sea benthic invertebrates, with particular interests in sea cucumbers, chemosynthetic environments, deep-sea mining, and genetics. My recent research, and focus of my talk at the Congress, applies the IUCN Red List to mollusc species endemic to hydrothermal vents, a habitat under threat from deep-sea mining, with the aim to raise awareness of the risk mining poses to deep-sea species and demonstrate how the Red List can be robustly applied to insular, understudied marine species. Prior to this, I graduated with a First-class Honours MSci Marine Biology degree from the University of Southampton.