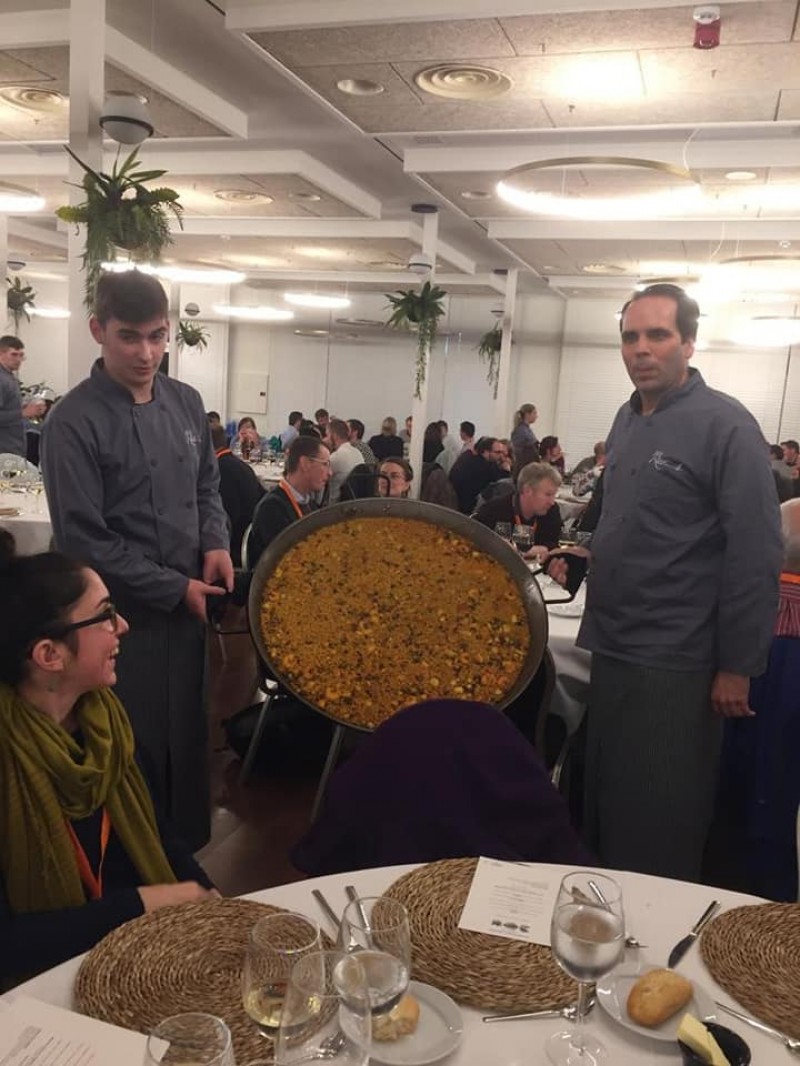 On the 15th – 21st of December, The Palaeontological Association held its 63rd Annual Meeting in the beautiful city of Valencia, Spain. I was provided the opportunity to attend this fantastic meeting thanks to a Challenger Society Travel Award, for which I am incredibly grateful to the society. The award allowed me to present some of the fascinating results which are being generating within my PhD research project, and additionally gain essential feedback and insights into the future of my project and career from the overarching palaeontological community.

A pre-conference fieldtrip was held from the 15th-17th of December to the Palaeozoic series of the Iberian Range, covering Lower Cambrian to Middle Devonian strata of the Teruel and Zaragoza provinces. Although I was unable to attend this trip, I was shown images of the finds, with some spectacularly preserved trilobites amongst the highlights. December 18th kicked off the conference with a morning of training workshops covering topics ranging through biomechanics to graphic design, primarily covered by the fantastic specialists from Transmitting Science. It was a difficult choice due to the expertise and variety of topics on offer, though I decided personally that the workshop “First steps in geometric morphometrics” run by Dr Soledad De Esteban-Trivigno (Transmitting Science, Spain) would prove most beneficial to my research, which covers changes in size and shape of planktonic foraminifera prior to extinction. The workshops were followed by the conference symposium, titled: “Virtual Palaeontology”, which proved to be a scientific and visual marvel! My personal highlight being Dr Peter L. Falkingham’s (Liverpool John Moores University, UK) presentation of “Virtual footprints: simulation and digitization elucidate deep track formation”, which gave novel insights into the interpretation and anatomy of fossil theropod footprints through computer modelling. Following the symposium, the conference ice-breaker was held at the Natural Science Museum of Valencia, which houses some of the best-preserved examples of Pleistocene megafauna from South America.

The next two days of the conference consisted of parallel sessions of oral presentations, whilst posters were on display for the remainder of the meeting, with a dedicated poster session on the 19th. Prior to this session was the annual address, this year from Dr Maria E. McNamara (University College Cork, Ireland). Dr McNamara’s address, titled “Not just skin deep: probing the secrets of fossil melanin using taphonomic experiments and analytical chemistry” reviewed the progress in studying the history and taphonomy of fossil melanin, and how current advances are underpinned by a strong analytical and multidisciplinary approach involving modern and fossil melanin data. Following the annual address and poster session, the delegates were taken by coach to Albufera nature reserve for the conference dinner. This proved to be an exceptionally memorable night, beginning with a welcome reception and live-cooking of traditional paella. This was followed by a brilliant performance of the regional dance the jota, an amazing three-course meal sampling local foods, and finally the well-deserved association awards.

The final day of presentations included my talk in the morning session titled: “To the bitter end: do planktonic foraminifera change their ecological niche prior to extinction”. It was great to be able to present some exciting results, and I look forward to publishing them for the scientific community! The conference was finalised with presentations from the organizing committee for the Annual Meeting 2020 in Manchester, UK, and for the student conference Progressive Palaeontology 2020, which we are hosting here at the University of Leeds, UK. The annual President’s Prize and Council Poster Prize were awarded followed by closing remarks to this amazing conference and experience. I owe a great deal of gratitude to the Challenger Society for their support, as well as a huge thank you to the Palaeontological Association for allowing me to present my research and of course Dr Carlos Martinez-Perez and his team for organising such a terrific conference. I’m going to miss paella, tapas, and picnics in the Turia river bed gardens with freshly squeezed Valencia orange juice, but I very much look forward to Manchester next year!

I am a PhD student at the University of Leeds where my primary field of research is the mechanistic drivers of evolution and extinction within single-celled marine organisms from the Cenozoic era (the last 66 million years) called planktonic foraminifera. Previous research on these organisms has allowed the scientific community to reconstruct the Earth’s climate millions of the years in the past, as the skeletons of these organisms contain a direct chemical fingerprint of the temperature of the ocean while it was alive. This has subsequently allowed us to identify intervals in the geological past which may be analogous to ocean conditions expected as a result of anthropogenic climate forcing.

My current research project, of which I was able to present on during The Palaeontological Association Annual Meeting thanks to the Challenger Society Travel Award, involves high-resolution sampling of an extinct group of planktonic foraminifera during the mid-Pliocene Warm Period, an interval comparable with global temperatures by the end of the century. During this study, I have been able to demonstrate that not only do we have long-term changes in species morphology, but also ecology – wherein we show species adapting to a new ecological habit prior to their extinction. This observation is incredibly important as we often use species of planktonic foraminifera for palaeoceanographic reconstructions, under the assumption they maintain ecological uniformitarianism for the duration of their geological range, though clearly this is not the case.

The research which I am conducting is producing really insightful data, which I plan to continue investigating and further develop once my PhD research has come to an end.