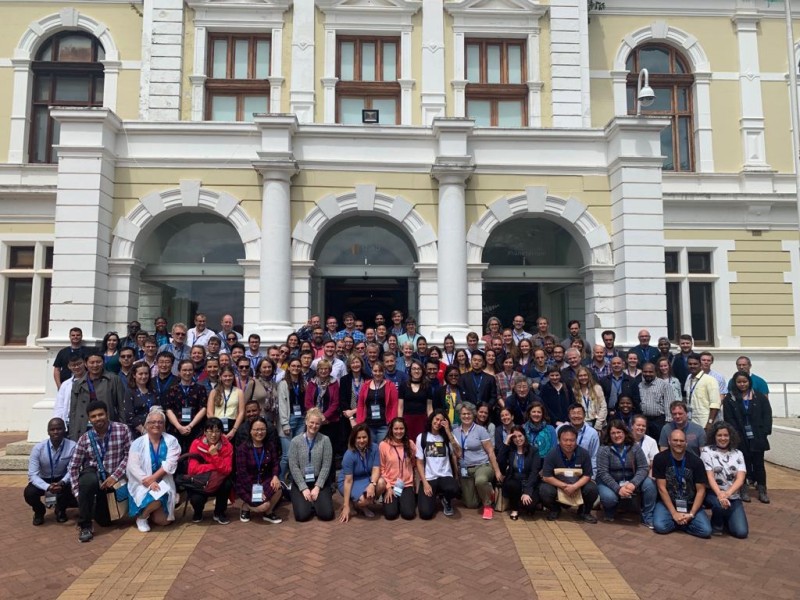 The International Jellyfish Bloom Symposium is the most important conference for the global jellyfish research community, and occurs every 3 years in a different continent. This year the Symposium was held in Cape Town, South Africa. The Opening ceremony and the Symposium dinner were hosted at the beautiful “Two oceans aquarium” were many species of jellyfish were displayed. The Symposium itself was hosted at the Iziko South African Museum where more than one and a half million specimens of scientific importance are kept and displayed. Together, more than a hundred of researchers and students presented talks and posters in a variety of fields, going from how to use new tools to detect and/or predict jellyfish blooms, to the use of jellyfish in medicine, biotechnology and even gastronomy. I was part of the conveners for the session on “The role of jellyfish in the ecosystem: from predator-prey interactions to biogeochemical cycling” and I introduced the session with a 5 minute talk. Later on, I presented my presentation: “Evidence of nitrification associated with jellyfish”. We concluded the session on the importance of shifting the commonly used narrative from “jellyfish are a nuisance for ecosystems and humans” towards “Jellyfish can also play important ecological roles and provide valuable services to human societies”. After 3 days of presentations, a bit of time was used to raise and discuss the future objectives of the jellyfish research community. At the same time, India was selected as the next host for the Symposium in 3 years. Overall, the symposium allowed me to realize and learn about the diversity of research undergone in the jellyfish community. It was a great opportunity to meet and network with the scientists who are the authors of the majority of the paper I read. I had good feedbacks and interesting suggestions on my work. I identified and made contact with the researchers who are working on similar topics as mine. I believe that my presence at this Symposium will lead to future collaborations and I am looking forward to being part of the 7th International Jellyfish Bloom Symposium being hold in India in 2022.

Mr Nathan Hubot is a postgraduate research student within Ocean and Earth Science at the University of Southampton. After a Bachelor in Bioengineering at the Free University of Brussels (Belgium), he did a Master in Marine Biology. Since then, he has been working as a research intern in the Huinay Scientific Field Station in the Chilean Patagonia and as Science Officer in the Southern Leyte Coral Reef Conservation Project in the Philippines. Now, he is investigating the role of Jellyfish in the Biological Carbon Pump at the National Oceanography Centre Southampton.