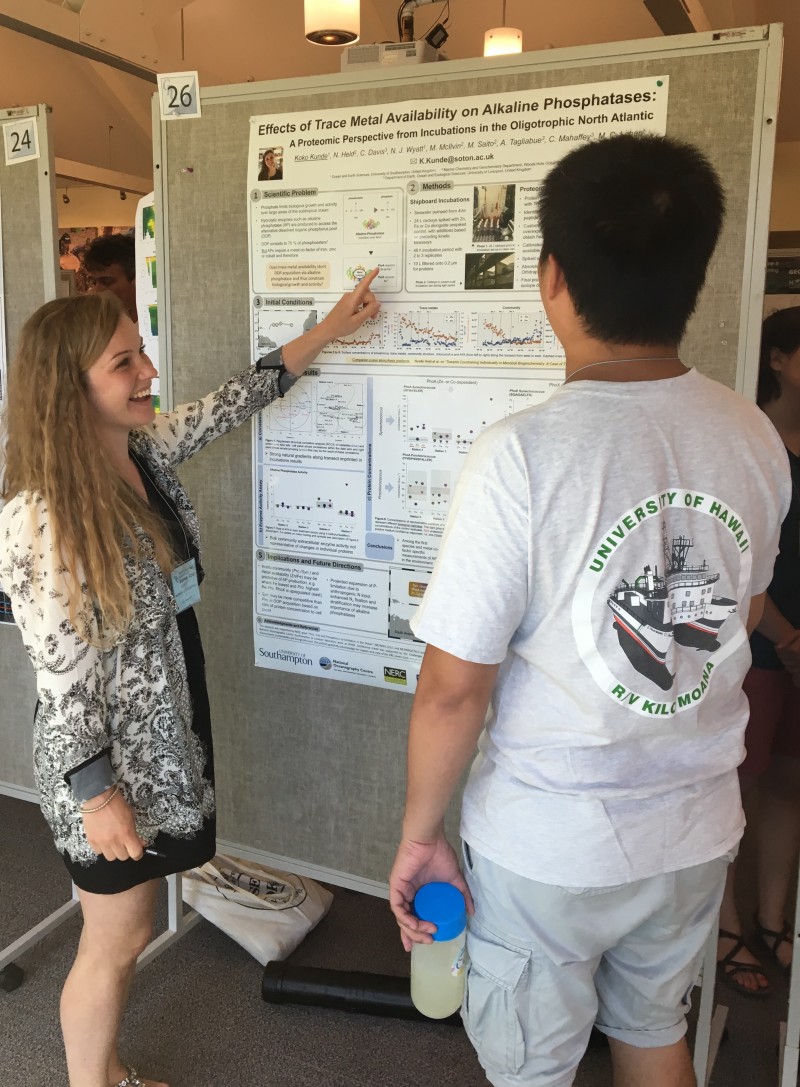 Thank you Challenger Society for supporting me with a travel grant to attend the GRC in Chemical Oceanography 2019, my absolute favourite conference so far!

Take an empty boarding school in the middle of beautiful New Hampshire, stick a hundred or so chemical oceanographers from around the world together, and create a fantastic week packed with non-stop presentations, discussions and workshops. This was the successful recipe of the GRC in Chemical Oceanography this year. The small scale and unusual format, with the science program lasting all day long from 9am to 9pm and with all conferees eating together in a big dining hall and socialising during kayaking and pingpong in the breaks, really created a unique environment to get to know the other scientists beyond the typical brief conference chat.

The conference kicked off with a two-day seminar exclusive to PhD students and early career researchers. Between talks and posters, the seminar was a fantastic platform for me to catch up with old friends, make friends and discuss my research ideas with my peers in a “safe environment” before the senior scientists arrived. The seminar was concluded with a mentorship session by Dr Chris Reddy (WHOI) on science communication, which helped me to understand my research in the context of policy making, the media and the lay public.

Then the senior scientists showed up later that day. At first, it was a bit intimidating as I was finally going to meet some of the faces behind the papers I have been reading, some of my role models, and perhaps most importantly, some of the scientists I would love to work with after finishing my PhD. But, the GRC is so small and so intimate that there is no chance you can hide – and in the end, you didn’t have to either. Every single attendee was so approachable, so interested and so interesting. People were joking that the GRC was almost like “science summer camp” as the whole atmosphere was incredibly friendly… well, at least until the big biennial football match was hosted: Team USA vs Team The-Rest-Of-The-World. After the rest of the world quickly defeated the US with 2:0 (no surprise here), we were all friends again. ;-) The science talks covered an exciting broad range of topics in chemical oceanography, from hydrothermal plumes at depths to macro- and micronutrient acquisition in the surface. For me as an iron biogeochemist, it was particularly great to see how much chemical and biological oceanography intersect.

All in all, this was the best conference I have been to so far. I left feeling excited and motivated about all the open questions and fantastic people in the field of chemical oceanography. I hope it won’t be the last time I attended.

I am currently a 3rd year PhD student with Prof Maeve Lohan and Prof Mark Moore at the University of Southampton. My research focuses on the micronutrient iron in the subtropical North Atlantic. In particular, I am investigating the controls behind iron’s distribution and bioavailability across the subtropical gyre to identify regions where it may become limiting for phytoplankton.