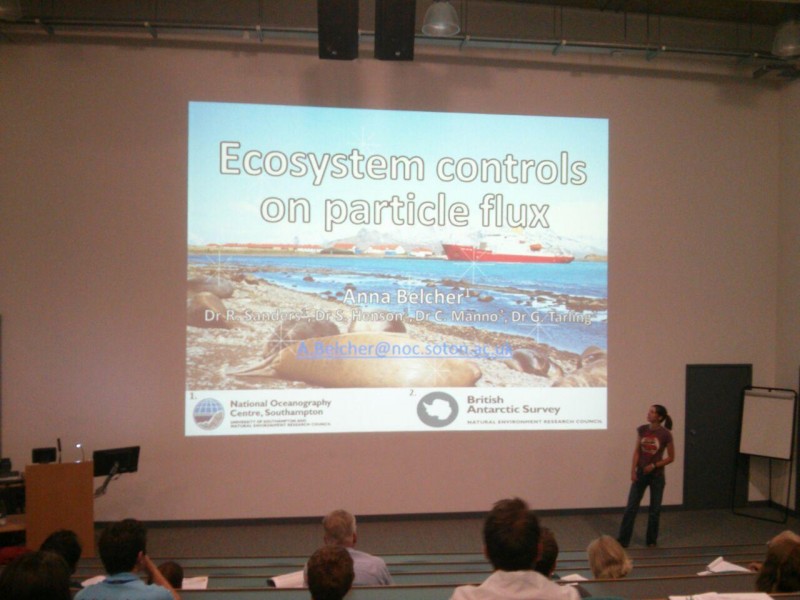 Challenger 2014 provided a great setting for my first oral presentation at a scientific conference, and it was an excellent opportunity to meet more of the scientific community and discuss my research with those working in similar fields. I presented in the Biogeochemical Cycles session, talking about the role of ecosystem structure and zooplankton behaviour on particle flux. Despite being a bit nervous about presenting to a large audience, I think the talk went well and I had some interesting discussions afterwards, giving me some new ideas to further progress my work.

Over the four days there were a large number of sessions covering a broad range of topics which was great for keeping me up to date with current research across other oceanographic fields. The marine policy session was particularly engaging and, I think, provided plenty of food for thought as to how important it is to ensure that our research is relevant to policy. The conference hosted some very interesting keynote speakers and a thought provoking evening lecture by Chief Scientific Advisor to DEFRA, Ian Boyd.  There was also a careers workshop, providing some great advice as to some of the possible careers after a PhD both academic and non academic.

Thank you again for not only hosting a fantastic conference, but also for providing me with a Travel Award to support my attendance. I am already looking forward to Challenger 2016!

Profile
Anna Belcher is a biogeochemical oceanographer currently investigating the role of ecosystem structure and zooplankton behaviour on the particulate flux of carbon in the ocean.  She is just coming to the end of the first year of her PhD and currently investigating the role of diel vertical migration on short term changes in the particle flux, particularly focussed on the Southern Ocean. Anna will be returning to the Scotia Sea, Antarctica later this year to collect more data and hopefully provide more of an insight into the spatial and temporal variability in carbon flux.

In 2010, Anna completed a four year undergraduate Masters degree in Oceanography at the University of Southampton, spending the third year at the University of Washington, Seattle. After a year off to do some travelling and exploring of the world, Anna spent two years working as an Oceanographic Surveyor in South Wales for Titan Environmental Surveys. She then returned to research, assisting with a number of research cruises before starting her PhD at the National Oceanography Centre, Southampton.