Borneo is more than just a great wildlife destination – it hosts great marine science conferences too! 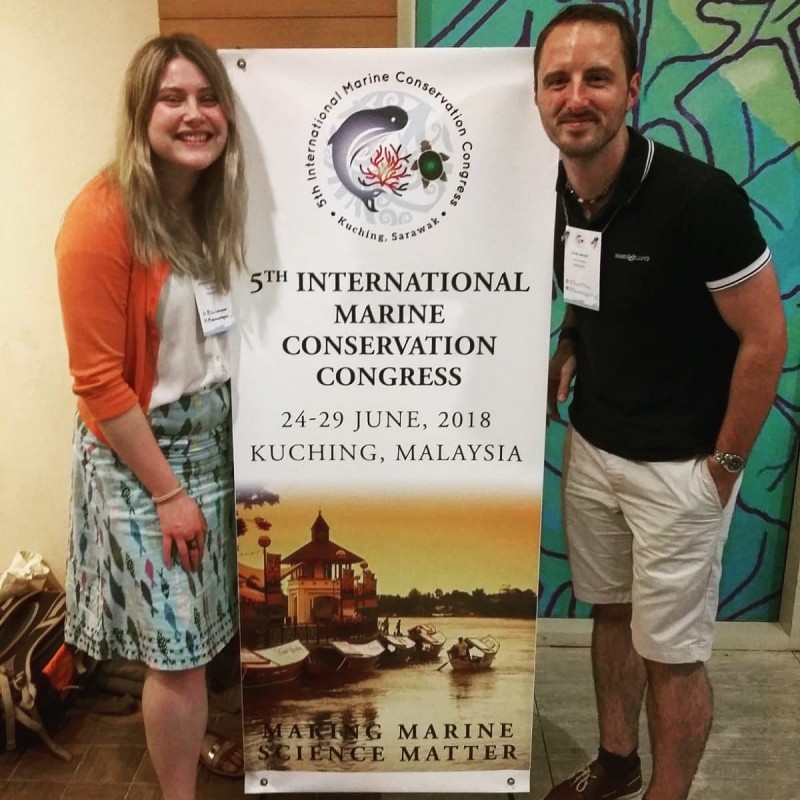 Every conference has its own vibe, its own atmosphere or even its own personality. Some are very specific and relevant to just a few specialist scientists, some are dry and uninspiring, some are even hierarchical and intimidating for early career researchers. The recent 5thInternational Marine Conservation Congress, held in the city of Kuching on Malaysian Borneo from 24thto the 28thJune 2018, was none of these things.

Thanks to a very generous grant from the Challenger Society I was able to attend IMCC5, alongside my partner, to present some of my PhD research on the formation of genetic population structure in Bottlenose Dolphins. We shared our experiences, as we always do, via our Marine Biology Life channel on various social media platforms. As a biennial international congress, IMCC is run by the Society for Conservation Biology Marine Section. Hoping to attract more scientists from South-East Asia, IMCC5 was held in the beautiful and friendly city of Kuching on the Malaysian half of the island of Borneo.
I have been lucky enough to attend a good number of conferences in my career so far but none have been quite as forward thinking, novel and dare I say revolutionary as IMCC5. With a huge number of additional workshops and activities it was hard to know where to spend your time. IMCC5 had a great focus on the concept of storytelling as way to engage people with the work that we do. This approach uses expression of emotions and personal experiences to allow a greater connection to our science, something altogether alien to most scientists. One of the highlights of IMCC5 was an evening entitled ‘Tales from the Sea’ where 9 brave scientists told their own marine conservation stories in front of a packed audience. I have to say this was one of the most inspirational and awe-inspiring events I have ever attended at any scientific meeting and I could tell the inspiration had spread to the rest of the congress too as people hurried off to re-write their presentations and include some of their own personal stories. For anyone who is unfamiliar with the concept of storytelling I urge you to seek out some training and think about including it in your next presentation.

As well as diverse activities like ‘Dungeons and Sea Dragons’ (a marine science themed Dungeons and Dragons tournament), Make for the Planet (where teams competitively used technology to come up with solutions to modern marine conservation issues and even a live recording of the podcast ‘Speak up for Blue’ there was also some great initiatives to promote diversity and inclusion. One of the best of these from my opinion was a concurrent International Marine Kids Conference which gave scientists who were parents the option of bringing their children and them being taken care of throughout the day, thus eliminating some barriers that may be posed by family commitments.

A consistent theme throughout the congress was the great need to avoid ‘parachute science’ in the marine science sector. ‘Parachute science’ is where western scientists collect data in developing nations and then leave with no engagement with local scientists or institutions. It is better for all of us to support the development of local scientific capacity, to never duplicate or undermine local efforts and strengthen international cooperation at all levels. This message was evident throughout the week and I believe it is something we should all take heed of.

The conference rounded off with the ‘Oceans Online’ add on day. Oceans Online focussed on some of the amazing online tools we have nowadays to engage people with our science and was an excellent forum for exchanging ideas and experiences. Following the conference there was of course opportunity to explore the amazing island of Borneo and we were lucky enough to see wild Orangutans, Crocodiles, Civet, Slow Loris, Clouded Leopard Cat and more birds than I could possibly list. As locations for an international conference go this has to be one of the best in the world and I would urge any conference planners to consider Kuching in their future plans. Finally, I would like to repeat my thanks to the Challenger Society, your support provided me with far more than just an opportunity to attend a conference.

Profile:
Daniel Moore is a doctoral student at Durham University under the supervision of Prof. Rus Hoelzel where he seeks to understand the influence of the environment on the evolution of population structure in marine predators. He does this by using next generation sequencing techniques and stable isotopes to examine population structure and feeding ecology in Bottlenose Dolphin Tursiops truncatusand Yellowmouth Barracuda Sphyraena viridensisacross the Mediterranean and the Eastern Atlantic. You can follow his research on Facebook (@MarineBiologyLife), Instagram (@MarineBiologyLife) and Twitter (@MarineBiologyL).