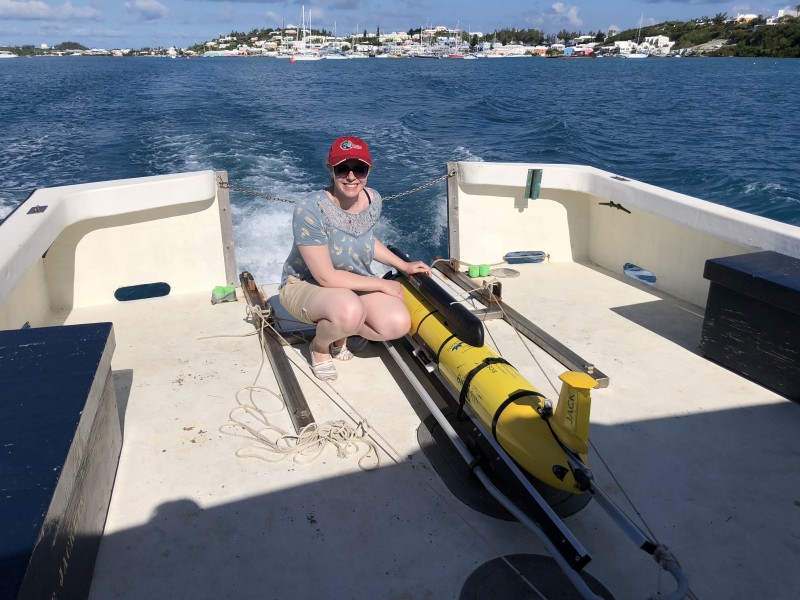 Over the course of my internship, I have been assisting Ruth Curry at the Bermuda Institute of Ocean Sciences (BIOS) by digging into the dynamics of nutrients and carbon cycling in the oligotrophic Sargasso Sea. Bermuda, being located in the heart of a subtropical gyre, is an important base for a wide variety of oceanographic sites, such as Hydrostation S and the Bermuda Atlantic Time Series (BATS) site, which have been operational for a number of decades. Further to that, the Mid-Atlantic Glider Initiative and Collaboration (MAGIC) project was launched in 2014, with the goal to acquire new high-resolution measurements of key bio-physical properties using autonomous underwater gliders. It is working with these gliders, as well as analysing the data collected from late spring through summer 2017, where I come in.
Although I have worked with glider data as part of my PhD project, this has been my first opportunity to really get into the “nitty-gritty” of how a glider actually works. It is a tremendous piece of kit, being equipped with key sensors to measure various oceanographic properties as well as two large lithium batteries that allow it to stay out in the field for months at a time. BIOS’s glider fleet comprises of three gliders: Anna, Jack and Minnie. I’ve had the opportunity to work with all three gliders and get first-hand experience with glider maintenance, piloting, ballasting and deployment/recovery.

Anna was recovered from her 3-month long deployment during my first week at BIOS. Having been out during the spring bloom period, we soon realised how productive it had been out there when we saw Anna covered in gooseneck barnacles. Minnie, who was also recovered at the same time, was quickly cleaned up and sent out on her second journey of the year: to directly measure nitrate concentrations from the end of spring and into the oligotrophic, low-nutrient summer. This provided a great opportunity for me, as every morning I was able to analyse the small snippets of information that she pinged back from the middle of the ocean, allowing us to observe what was happening out there in real-time. Minnie also proved very popular with the local wildlife: in the space of two weeks she was attacked by two sharks, one of which chewed off her rudder. Unable to steer her, she was drifting aimlessly with the currents before BIOS’s ship, the RV Atlantic Explorer, was able to pick her up, replace her rudder and send her back on her way.

The third glider, Jack, had been recently fitted with a Microrider: a delicate piece of kit that is used to measure fine-scale turbulence in the water column. I was extremely fortunate to be able to attend the 2018 Ocean Microstructure Workshop, hosted at BIOS. Over the course of the week, we received training from the guys at Rockland Scientific Institute on how to process and quality control microstructure data. As part of this workshop, we went out on the RV Henry Stommel and deployed Jack for some Microrider test profiles. An added complexity was setting up incredibly delicate probes on a (very) rocky ship, where even a fleeting brush from a trouser leg could break them.

Back in the office, I analysed data collected from May-September 2017 in order to explore oxygen and nutrient budgets at spatial and temporal scales that are unfeasible using conventional ship based methods. As my PhD is completely focused on shelf seas, this was a fascinating look into the biogeochemical and physical processes occurring within a subtropical gyre. Results from this work will also feed directly into a proposal to get Jack – complete with his Microrider – out into the Sargasso Sea to measure fine scale turbulence throughout the oligotrophic summer months.

Overall, my 10-week internship at BIOS has been an incredibly interesting and valuable experience. I would like to particularly thank Ruth Curry, for her continued support and guidance throughout my internship, the UK Associates of BIOS and the Challenger Society for helping me fund my trip.