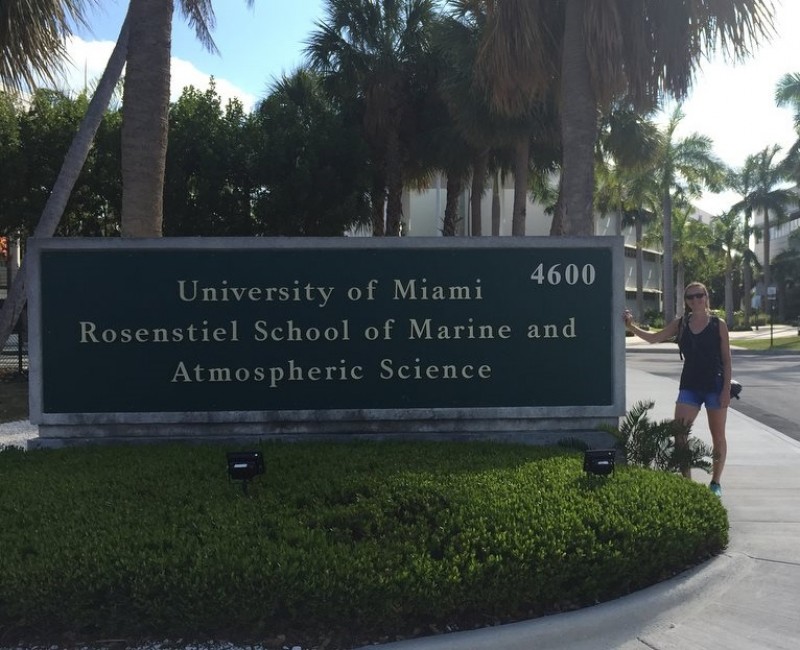 I would firstly like to thank the Challenger Society for awarding me a grant that contributed to my travel expenses to Miami for a side-project from January to April 2018.

I started this project about a year ago while taking part in the RAPID (JC145) research cruise from Tenerife to the Bahamas (28thFeb-8thApril 2017). As well as volunteering to help with mooring and underway measurements and processing, I started comparing the surface velocity data from the Vessel-Mounted Acoustic Doppler Current Profilers (VMADCP) and satellite AVISO (Archiving, Validation and Interpretation of Satellite Oceanographic) data of six previous cruises. The promising preliminary results while on-board lead to the UK-PI of RAPID, (Principal Investigator, Dr. David Smeed) and I wanting to continue this project while back on land. I presented these results on a poster at the biannual ACSIS-OSNAP-RAPID meeting in Oxford in September and received encouraging feedback.

Since the project was not directly related to my PhD thesis work, I suspended my PhD in order to turn it into a placement at a different institute. I therefore pursued the project in collaboration with the other half of the RAPID team based at Rosenstiel School of Marine and Atmospheric Science (RSMAS) in Miami. I really enjoyed working with both Prof. William (Bill) Johns at RSMAS and (and David back in Southampton) who were both not only very generous with their time but also acted as mentors, being very encouraging and supportive. I saw a large benefit in working with both the UK and US RAPID team especially while nearing the end of my PhD when building a network of international collaborators as an early career scientist is essential. Furthermore, I gained insight on being part of a research group in a U.S. oceanography institute and strengthened my understanding of physical oceanography while sitting in on some of Bill’s Large Scale Circulation lectures.
I am very grateful for the travel grant since it was an unforgettable experience and I left knowing that I had learnt a lot.

Profile:
Delphine Lobelle is a third year PhD student at the University of Southampton (co-funded by the National Physical Laboratory, London). She is investigating statistical methods to analyse interannual to decadal trends and proxies of the Atlantic Meridional Overturning Circulation (AMOC) transport using both observations and models.