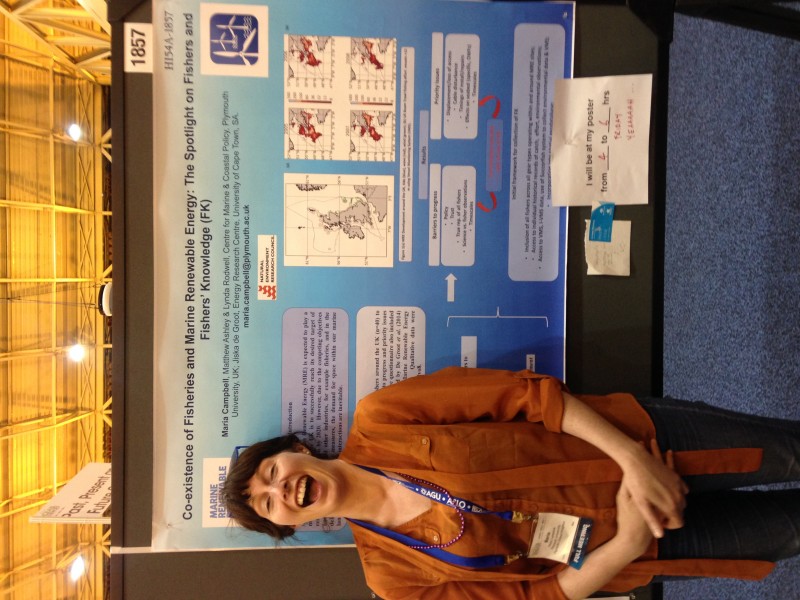 Oceans Sciences 2016 ‘Ocean Sciences at the Interface’  took place from 21st - 26th February this year, in one of America’s most culturally and historically rich destinations, New Orleans, or the ‘Big Easy’ as it’s also known.  Cosponsored by the American Geophysical Union (AGU), Association for the Sciences of Limnology and Oceanography (ASLO) and The Oceanography Society, this is one of the largest gatherings of ocean scientists in the world.  The conference also facilitates engagement between scientists and the latest technology developments.  After attending my first Ocean Sciences in Portland in 2010 right at the beginning of my PhD, I was keen to go back and present the final chapter of my PhD, somehow completing my doctoral cycle, and the hope of maybe finding future employment, or at least set some plans in motion.

This conference is a meeting of scientific giants, an intense gathering of minds, really espouses an interdisciplinary approach to our work, with over 1500 talks and 3500 consisting of a diverse program covering topics in all areas of the ocean sciences discipline.    I attended a series of postgraduate workshops on the Sunday just before the conference began.  An intense day with workshops focusing on grant writing, teaching undergraduate ocean science, the psychology of learning and discussion of ways to improve our communication strategies with Consortium for Ocean Science Exploration and Engagement (COSEE) other researchers from around the world was a great start to the conference.  My marine renewable energy sessions did not take place until the last day, thus I had a free week in order to immerse myself in the beauty of all that I love in those briny depths.

My interests are really broad, and spent most of the week dashing from one lecture theatre to another; diving into the deep-sea, following fisheries managers around the world, being part of new innovations in environmental and ocean science education, taking action on ocean plastics/marine debris, mapping the oceans, monitoring plankton communities at various spatial and temporal scales, joining the noise makers in maritime spatial planning, and being part of enlightening ocean policy debates at local, national and international scales.  And throughout, meeting some of the people who have inspired my work and who I would simply like to be.  During the conference, workshops also run in parallel, and it was quite difficult to attend everything that I would have liked.  However, one of the workshops on ‘telling stories about your science’ with broadcaster Ari Daniels was a highlight, and really infused us with a sense of infinite possibilities with our science.  My poster presentation was intense, but enjoyable with the addition of New Orleans local brew, and I managed to set up a visit to an institution, perhaps discuss some collaborative work with fishermen and the holy grail of that discussion –funding!

During the conference, a number of awards are given to scientists who have contributed immensely to the development of their field, and in particular I loved the speech by Prof. Fiammo Straneo, recipient of the AGU Sverdrup Award, which in short, very eloquently described how we cannot move forward in our respective fields without collaboration.  I also have an obsession with deep-sea fauna, and I still hope to develop some ideas in this field, and having the chance to hear Prof. Antje Boetius speak was a great addition to the Plenaries. We also had the added pleasure of a presentation by the world renowned oceanographer, and Emeritus Professor Walter Munk.

As a fisheries scientist with a passion for the science communication element, myself and a colleague from Scripps have proposed a PechaKucha session for 2018; this is a very different presentation format, where 20 slides are allowed, and each slide has a time limit of 20 seconds.  We first took part in this type of presentation at the World Fisheries Conference and it truly was one of the highlights, making one regard their research and how to present it in a new light.

So join us in Portland for Ocean Sciences 2018…