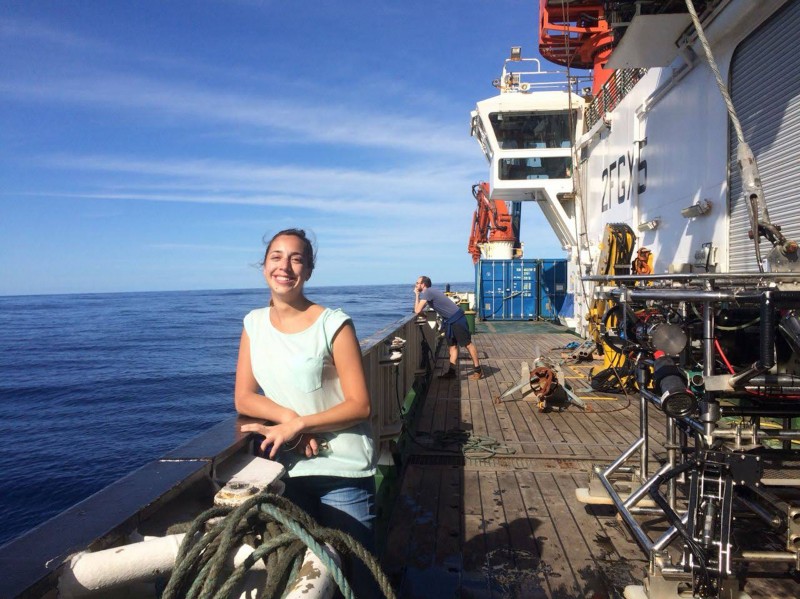 On the 20th October 2018, 20 days after its original sailing date (due to problems at the dry dock and vessel refit), the Royal Research Ship (RRS) Discovery sailed from the Brazilian port of Santos to the Rio Grande Rise for three weeks to investigate cobalt-rich mineral deposits of interest to potential deep-sea mining. It was my first transatlantic research cruise and I was looking forward to the deep-sea discoveries and science equipment put in action.

The Rio Grande Rise (RGR) in the South Atlantic, 1400 km east of Brazil, is of interest for seafloor mineral deposits rich in iron, manganese, and other metals important to modern society. As part of the Marine E-Tech project (http://projects.noc.ac.uk/marine-e-tech/), the aim of the cruise was to improve the understanding of the processes controlling the formation and composition of deep-ocean mineral deposits and the biology that colonises them. I was part of the team of biologists studying the vulnerability of deep-sea fauna to disturbances that would arise if the sites were mined. The biological objectives were to characterize the diversity and structure of the benthic assemblages of the different habitats present in the area.

During the three days of transit to the site we prepared presentations to show our current research and plan the missions of the expedition. This gave me an opportunity to engage with the other biologists and geologists onboard with whom I would work closely during the sampling. Once on site and prior to any mission, the autonomous underwater vehicle Autosub6000 was launched from RRS Discovery to map the Rio Grande Rise in detail. After the area was mapped, high definition video cameras on the robotic underwater vehicle HyBIS were used to explore, sample and photograph features on the seafloor. It was my first time working with an ROV and it was amazing to watch live and explore the ocean floor. Dredges and gravity cores were also used to sample the seabed. Biologically, habitats were dominated by different organisms such as sponges, black corals and echinoderms, although these were sparsely distributed. In general we noticed low abundance and diversity probably caused by the low input of organic matter in this area. We collected and preserved samples from the dredge and HyBIS for DNA and taxonomic analysis.

In terms of working shifts we were very lucky. Every shift had the possibility to take part in every science operation, so I was able to observe and learn about the equipment and planning of each event. In general, the expedition was very successful and we only lost three days to poor weather when we had to run from an unseasonable cyclone. We returned back to the port of Santos on the 8th November 2018.

The experience was incredibly enjoyable and an eye-opener for future cruise opportunities. It was clear that preparation is key to any successful expedition. By working with more experienced sea-going biologists on the cruise, I appreciated all the pre-planning, preparation and equipment that is necessary to sample biological specimens; namely, for preliminary sample observation and classification, analysis, preservation, and reporting. Well-organized, successful teamwork made the experience memorably gratifying but, most of all, getting along with all the scientists and crew and meeting fantastic people made it one for the memory bank. Moreover, this opportunity has provided me with the chance to forge new science collaborations with other research disciplines and transatlantic institutes that would otherwise have not been possible. I am therefore really thankful to the Challenger Society and the project ATLAS for funding my trip and making this opportunity possible.