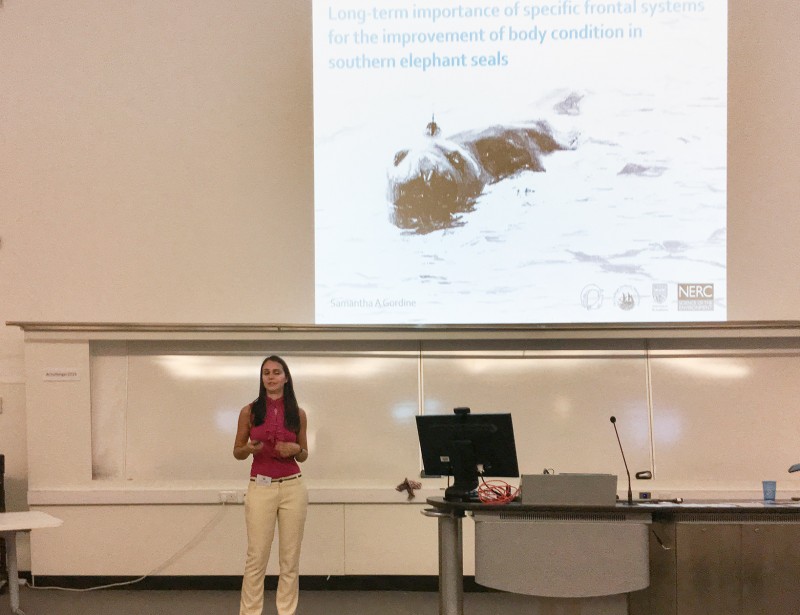 The Challenger Society’s Conference 2016 in Liverpool began for me with an informative careers outreach event, during which I had the excellent opportunity to meet other early career scientist like myself and discuss the prospects and caveats of a career in marine science. This event was followed by an informal wine reception in the beautiful setting of the Victoria and Albert Museum. The museum offered a great atmosphere of historical significance to the first official meeting of the conference attendees. It was at this reception that I met my session convener Dr. Peter Miller, as well as many other new faces in the marine science community.

The first official day of the conference was my busiest day during the week. After the inspiring plenary lecture by Prof. Tim Lenton and many interesting talks in the first morning session, it was my turn after the lunch break to open the session on ‘Drivers for patchiness and marine vertebrate dynamics’ with my presentation on the ‘Long-term importance of specific frontal systems for the improvement of body condition in southern elephant seals’. I am grateful for the interesting questions, input and feedback I received following my talk. Overall, this session ranging from the subject of plastics in the ocean over cetaceans to fish developed to be a diverse and stimulating session for everybody. The very same evening I was taken on an adventure to discover one of Liverpool’s suburbs, Kirkby, where I had been invited by two fellow conference attendees Lauren Biermann and Doreen McVeigh to present our science to members of the public at the Kirkby SciBar. This event was particularly close to my heart, as I was so glad to see so many different people of all ages attend and engage with this event. Personally, I received many questions following my talk. However, I was also an enthusiastic listener to the talks of my two companions. Doreen in particular managed to instil an extreme interest for deep sea exploration in me, despite my fear of being at such at extreme depth. At this particular point, I would like to sincerely thank Matt Donnelly and his wife for organising the Kirkby SciBar.

The morning of the second day did indeed demand an early start. As part of the ‘Diversity in Marine Science’ panel, I participated in the discussions on gender, ethnicity and disability being put forward. The expertise of the different panel members brought about an interesting constellation of viewpoints and inputs. However, I was also glad to see so many people attend the session and the many comments we received from the audience.  Unfortunately, the discussion had to be ended for the plenary talk when it started gaining inertia. The following keynote speech by Prof. Martin Visbeck despite continuing on a different topic, continued on the lines of the early morning diversity session by urging each individual to assume responsibility, action and investment to advance the marine sciences. The remainder of Wednesday was filled for me with a wider variety of presentations.

During the week of the conference, which was at the first week of September, Liverpool had been blessed with surprisingly warm weather. I was fortunate in being able to enjoy some of this during my lunch break stroll, exploring the University of Liverpool’s ground and venturing the National Oceanography Centre’s building. As part of the conference’s mentoring scheme, I had a very informative informal meeting with Dr. Ben Wilson and Matt Cobain during which we discussed potential career pathways, opportunities and challenges.

Wednesday evening formed the conference’s highlight with its conference dinner in Liverpool’s Anglican Church. The impressing architecture of the building as well as the surprising and entertaining speech spiked with black humour speech by the Dean, who virtually appeared and disappeared in the pulpit out of nowhere, certainly formed the non-scientific highlight of this conference. The evening was followed by fascinating exchanges with my table members whilst savouring our excellent meal. Whilst sand was running through the hourglass and a many bottles of good wine were enjoyed by all, a majority’s decision led to a large migration into the city into the arms of cocktail serving pirates at the Alloha Bar.

The highlight of the final day was the Challenger Medal lecture by Prof. Karen Heywood. It was truly inspiring to learn about her career and about the careers she fostered along these years. It is her speech that made me think of Fridtjof Nansen’s words: ‘Have you not succeeded? Continue! Have you succeeded? Continue!’

The above mentioned events formed the cornerstones of my experience at this conference. However, there were many more talks, posters, new acquaintances, the excellent food during lunch breaks, and the outstandingly seamless organisation of the event that made this conference truly exceptional in many respects. I am truly grateful for having been able to attend this conference, and I am hoping that this will not be my last Challenger Society conference that I will attend.


Profile:
Presently Samantha is a doctoral student at the University of St Andrews under the supervision of Dr. Lars Boehme and Prof. Mike Fedak. In 2013, she received a first class degree in BSc (Hons) Marine Biology from the University of St Andrews and obtained the Deans’ List Award for her academic achievements. For her Honours thesis, she received the ‘Highly Commended’ award in ‘Life Science’ category from the international awards programme ‘The Undergraduate Awards’. Since then she have been actively involved with the Undergraduate Awards as a judge. Before Samantha fully focused her research activity on marine biology, she used to work in the group of Prof. Seth J Davis at the Max-Planck-Institute for Plant Breeding Research in Cologne, Germany.  During her final two years as an undergraduate, she increasingly became fascinated with physical oceanographic properties and their effects on marine species, which led Samantha to work with data gathered by animal-borne instruments. Her current research focuses on the diving behaviour and well-being of southern elephant seals in relation to the oceanographic environment and the abiotic changes in this environment. For many years, however, Samantha has been interested in the physiological responses and the adaptability of corals to ocean acidification and warming. Generally, Samantha is enthusiastic about marine science and related topics such as marine policy, education and science communication. In the near future, she is looking to develop her work experience in these areas.